A blast from the past! (or not)

While digging around through the attic today, I found a Manny Ramirez rookie card packed away in all my stuff! We all now look at Manny Ramirez of being a steroid user and a cheater, but some forget to credit him for the skill and effort he put into his rookie season. Although he has decided to come back and play another year of MLB baseball for the Athletics, he was still a major force on the 2004 and 2007 Red Sox championship teams. And without Man-Ram, I don't think we would have broken the curse. For the MANNY (no pun intended.....lol) years of service Manny, I must thank you. Here is his Rookie Revue card from 94 Donruss. 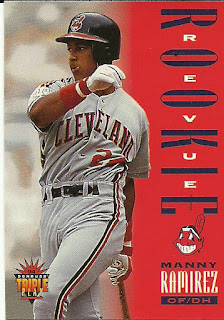 Posted by Scott Hubbard at 8:08 PM

Ah Manny. What a train wreck. It is interesting to see how the circus will play out this year in Oakland.