Some serious MOJO at the card show in Raleigh NC.

Well, to start off this post, I would like to show you some things I got from my awesome friend William that I met at the show today! He gave me a nice stack of cards for free! Below you will find only SOME of the cards he gave me. All were greatly appreciated William! Thanks! 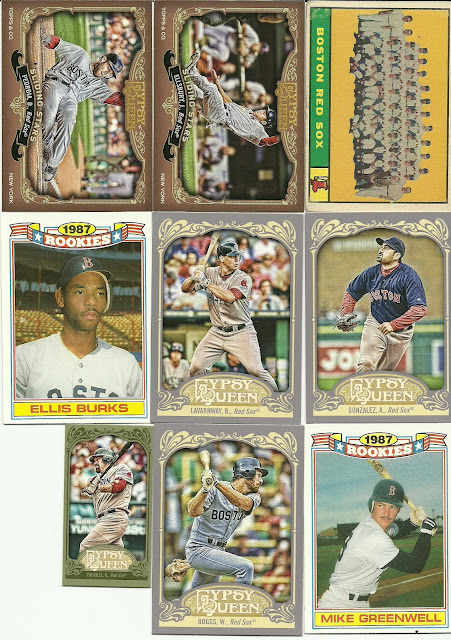 I thought that this was a really cool stack of cards. I especially like the vintage Red Sox team picture card at the top right corner! Also, the Youkilis will be a nice card for my Red Sox mini card PC.

Here are some cards that I bought from William at the show. 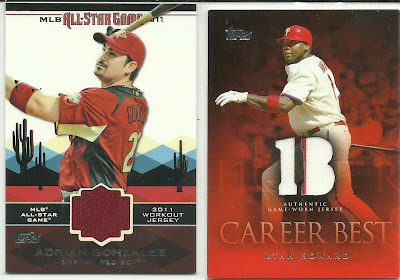 I thought that these were two VERY neat relics, so I had to pick them up. The Gonzalez is just a pretty looking card, and the Howard has a pinstripe down the center part of the relic. I'm always looking for relics, so these two cards were very nice for my collection.

When I was walking around browsing, this Paul Molitor card caught my eye, and I knew I couldn't leave the show without it. So I picked it up as well. 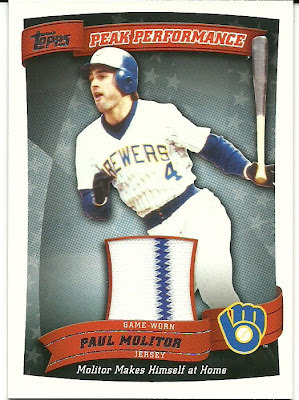 I just thought this was a seriously HOT card. It has a pinstripe and everything! Just a beautiful card. couldn't beat it for 3 bucks! I'm not sure how much it books currently, but it HAS to be more than 3 dollars.

Anyways, this is where the real story begins. I had started noticing when walking around the show that I was just not finding anything else. So I found 2 jumbo packs of the brand new Bowman Chrome 2012 and JUST barely bought them. I got both for 21 dollars. which left me with 5 bucks. But I also gave up 5 relics that I didn't want anymore. When I bought them I decided that it would be fun to open them in front of William since he didn't have anybody at his tables. The Texas Rangers fan I bought the packs from, wanted to know what I got, so he came over and watched me open the cards as well. First pack, nothing. Second pack, hell of a different story. I pulled a Yu Darvish autogrpah card. This Texas fan looked like he had fire ants in his pants when he watched from behind my shoulder and saw it pulled. He made sure he was getting that card. William rightfully convinced me to sell it. (GOOD CHOICE!) I got 300 dollars cash for it ON THE SPOT. He turned right around and flipped for 100 bucks, which I thought was lame. (since he "had" to have it) But that is beside the point. Anybody who knows me, and knows me well, knows i hate Japanese pitchers with a passion. The Red Sox have tried Japanese pitching and ultimately, those guys are just a waste of money. So 300 dollars was a done deal for me. Could I have gotten $400? $500? Probabaly. But what I turned around and bought was much better than the Yu Darvish. Here is the picture of the card anyways. (I had this card for about 2 or 3 minutes before I sold it.) 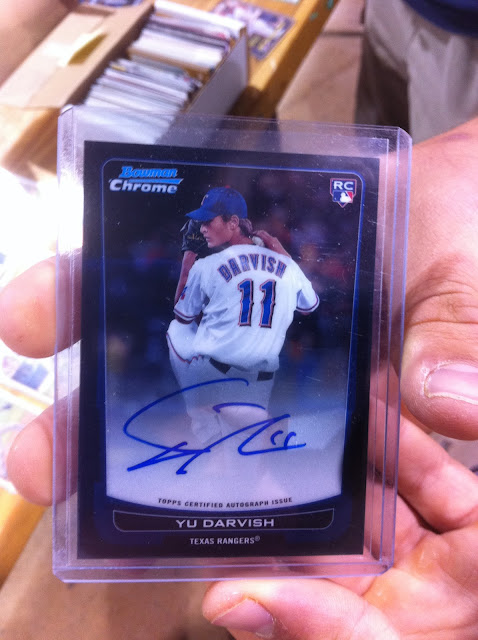 Yes, nice card. But I think that selling it was a smart decision. Just wait until you see what I bought with the money!

This card will wrap up my blog for tonight, I just want to say that this card DEFINES sexy. It is WAY better than the Yu Darvish would ever be. Got to thank William for the advice for selling it though. I think it was a smart decision. I have always wanted a Strasburg auto, so I went to town with the money I had just been given. Here is the card I bought for $200.

In my opinion, this card blows away Yu Darvish. I finally have what I have wanted for what seems like forever. A Strasburg auto. Ohh and a booklet. ;)
Posted by Scott Hubbard at 7:45 PM 1 comment: