Recap of My Trading Frenzy with Judson

So I have actually started to hit it off with another blogger that I follow (Judson). We have been doing a lot of small trades here and there, and they have been quite easy, pleasant, and painless. I have also enjoyed the little bit of friendly conversation that he and I have had over email. There just don't seem to be a whole lot of social and friendly people in the world anymore, so to run across one like I have is always a nice surprise. Anyway, I will share with you what I have gotten from him the past several weeks! 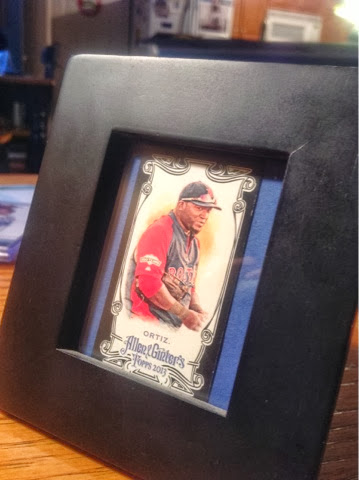 So this black mini parallel from 2013 Allen and Ginter, along with the regular Ortiz 2013 Ginter Mini he sent me, are nice additions to my Ortiz PC. These were actually very generous throw ins for a package that was mostly centered around the following card. 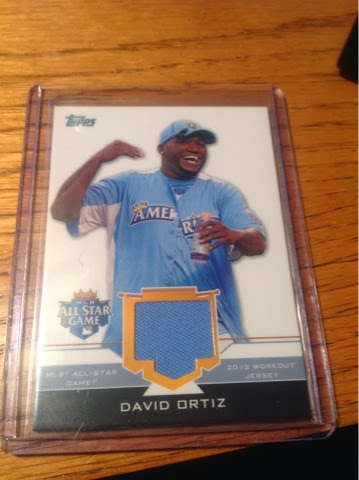 This is a David Ortiz All-Star Stitches relic from 2012 Topps Update. I have the gold variation of this card, but I needed this standard relic to go with it. Another great addition to the PC.
About a week or so after I got this card package in the mail, he sent me a scan of a David Ortiz die cut card he pulled from 2013 Topps Chrome and asked me if I was interested. Obviously I was, so he sent me the following card for whatever I feel is fair for it. 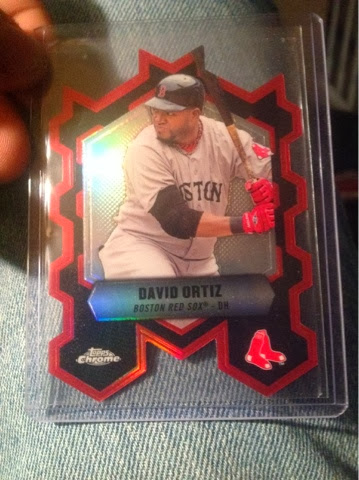 So if I said that Judson wasn't hooking me up, I would be lying miserably. I'm not a huge fan of die cuts but these chrome ones are very sharp looking. Of course the fact that the card features my favorite player doesn't hurt at all either! 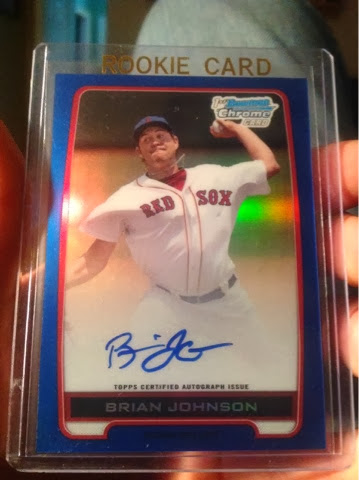 About another week later, I contacted Judson about a card that I have had interest in for a little while. This Brian Johnson Red Sox blue refractor autograph to /150 is a beautiful card of a Red Sox pitching prospect that you could very well see pitching at the big league level in a couple of seasons.
Oh, and by the way, I am really bummed about how the blue refractors look in this years Topps Chrome. They made the blue refractors a light blue color opposed to this gorgeous dark blue color, and I must say, I'm not a huge fan of it.
But anyway, that is the awesome mail I have gotten from my new trading buddy, Judson. These cards have found the perfect home, and I'm so thankful to own them. Thanks again, Judson!
Posted by Scott Hubbard at 2:24 PM